In an out-of-touch and at times baffling article, Washington Post opinion writer Charles Lane recently penned a piece he entitled “Why the decline of the homeownership rate is good news.”

He’s referring to the fact that the homeownership rate in the U.S. has dropped below 63 percent to its lowest level in decades. We covered this news slightly differently several weeks ago.

In the article, Lane tries to simultaneously make the case that homeownership is a bad investment and that the government is unable to affect homeownership rates. The only option, he says, is to get government out of the housing market.

Homeownership has long been the American Dream, with studies showing that it contributes in positive ways to everything from education to wealth-building. So why does Lane think that Dream is dead? His argument can, with some effort, be broken into two pieces.

“If the Great Recession taught anything, it was that… homeownership is not a surefire ticket into the middle class. It can be downright risky.”

This is an interesting example from someone who is advocating for less government involvement in the housing market. The Great Recession, as many readers may recall, was precipitated by the collapse of the predatory mortgage market.

Mortgage brokers and Wall Street bankers, who for the better part of a decade had been getting rich off of deceitful loans to poor families (and people of color at disproportionate rates regardless of income), saw their party come to a bitter end in 2007.

That crash logically left two options: to provide greater government oversight of loans, which we know for a fact to be effective from CRA data, or to let homeownership become an exclusive pursuit of the wealthy.

Homeownership remained a solid investment throughout the recession for many low- and moderate-income families with fair mortgages (and good counseling), especially now on the other side of the collapse as prices begin to rise again.

As you might have guessed, however, Lane picks option two, where owner-occupied homes become the yachts of the future.

“[Europe’s] modern experience suggests no simple connection between a high homeownership rate and the ‘positive externalities’ often attributed to it.”

Lane makes a convoluted argument about European countries, some with homeownership rates higher than the U.S., others lower, and draws the conclusion that government policy doesn’t matter.

But to borrow a quip, it must be noted that we are not Denmark.

Government intervention has clearly had huge impacts on homeownership rates in the U.S., although it’s not surprising that Lane has missed this.

Lane, like many Americans, seems to have only a vague understanding of the racial wealth gap in America. He does mention this phenomenon briefly, right after celebrating falling homeownership and right before deriding government involvement in it.

“…the reconcentration of home equity, while positive for those who own homes and for the overall stability of the economy, is regressive with respect to wealth distribution. This is especially so because African Americans and Hispanics remain less likely to own homes than whites.”

A fleeting moment of insight. The gap in homeownership between whites and people of color is a huge part of the reason that black families on average have just 1/16th the net worth of white families. The numbers are similar for Latinos.

But what Lane fails to mention is that these lower homeownership rates for people of color are no accident.

A whole series of racist government policies, some of which were dismantled just fifty years ago, provided bountiful opportunities for white families to own their homes, while locking black and Latino families out of the process.

And unsurprisingly, that dynamic shows up in the data. The reason white families have a homeownership rate today that’s about 30 points higher than black and Latino families is precisely because of this government intervention. 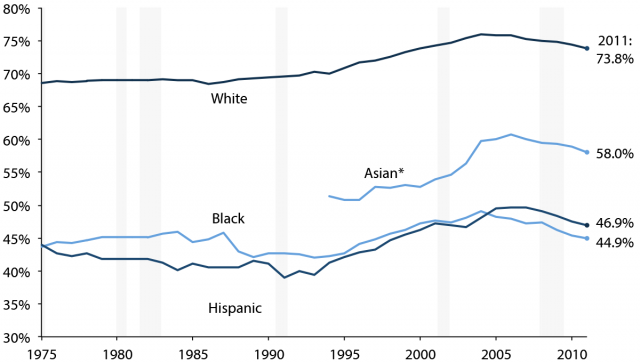 U.S. homeownership rate by race over time; from the Economic Policy Institute

We can see that since 1975, shortly after the end of explicitly racist housing policies, the homeownership rate for different racial groups has moved more or less in sync. All groups had made solid gains by 2006 before the crash wiped them out.

So a recap on our history lesson…

In the decades after the U.S. did away with its explicitly racist policies, homeownership rates for different racial groups began moving together. By 2006, all Americans had seen an increase in the homeownership rate.

But due to an under-regulated mortgage market, which disproportionately targeted black families with sub-prime loans, many of those gains were erased. Families with fair mortgages who were able to keep their homes have still seen solid returns on their investments—a point Lane unintentionally hammered home at the opening of his article—but many others have not had that opportunity.

The logical question, then, would seem to be what the government can do to close the racial gap in wealth and homeownership that it has created.

Unfortunately, the logic in Lane’s article is about on par with his framing of history.